The King of Scanlon’s Rock Review 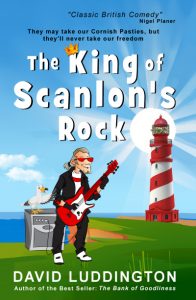 Trying to pigeonhole Luddington’s style of humour is surprisingly tricky. Imagine Tom Sharpe without the profanities, or Douglas Adams without the spaceships. Maybe P.G. Wodehouse in a modern age, or Ben Elton without the anger? None of which really capture the essence of this author, but might at least give a guide to the direction.

His latest book, the King of Scanlon’s Rock, concerns an ageing rock god, (think Keith Richards or Jimmy Page), who buys a tiny island off the coast of Cornwall then declares Independence from the UK. The chaos which ensues is classic Luddington fare, with pedantic civil servants, cantankerous barmen, officious border police, cranky Cornish fishermen and above it all, a man with an absurd idea and a mission.

Luddington’s skill lies in taking a seemingly realistic situation, then gradually turning it into something slightly surreal yet still managing to maintain a feeling of plausibility. And in The King of Scanlon’s Rock, we are drawn along through a chain of more and more outrageous events, until the inevitable final chaos.

The King of Scanlon’s Rock is British Humour at its best. Warm, feel-good and full of characters who, despite yourself, you will love by the end of the book.