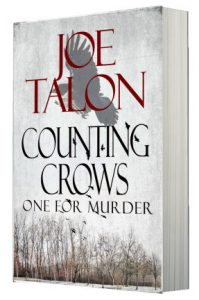 Reviewing a book like, Counting Crows, is surprisingly difficult because all you want to do is jump up and down and tell people to buy it! But I need to say more so here it goes.

The characters are so well-drawn, even the walk on parts are defined and rounded. The protagonist is flawed, accessible and yet just hero enough to be humanly exceptional. The antagonist is the kind of person you love to hate. The women are just as well rounded as the male characters and have a believable place in the story. So, let’s talk about that…

The story is fascinating, dark, scary, strange and occult without being horror. You’re never quite sure if the mysterious happenings are because of Lorne’s PTSD or if they’re real. The world is conjured for us with metaphors that could come from a poet rather than a thriller writer. They allow you to feel the rain on your face and touch the fog over soggy moorlands. Having a gay female vicar as Lorne’s closest friend is just lovely – it gives him a humanity he might not have without her.

I don’t know Exmoor but it’s now on my list of places to visit because I’d love to see some of these places for myself.

Joe Talon is an author who is worth watching for the future because the big names in this genre have a new contender for the number 1 spot.