War of the Elements 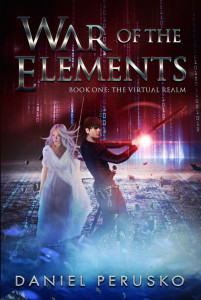 Once synchronized to the system, the electrical signals which would normally go into a user’s brain are intercepted, paralyzing their body and sending them into a dreamlike state. Released on this system is the first full virtual reality world dubbed ‘War of the Elements‘ Soon, all of the players who entered this brave new game world called War of the Elements will realize the brutal truth through a global in-game message – stating that a virus has been embedded into the system which disables the logout function.
In addition, they only have a single life in this world and if they die in the game, they will be stuck as a vegetable in the real world permanently. The only way to escape this fate is to complete the penultimate mission of this world – a mission that may turn friends into foes.

What starts as a simple game turns into a struggle for humanity’s survival, as well as a trip through ancient history from a lost era. Two highly skilled gamers including the socially awkward Drake and the free spirit Karla dive into the depths of this dangerous unknown land. Will they beat the game of death that awaits them, or die trying?

Virtual Realm is an interesting concept. Essentially taking elements straight from the myths of Hercules or Homer and transposing them into a futuristic setting this book is a good rip-roaring adventure. Taking as its start point a reasonable interpolation of modern computer science the book maintains a high degree of realism whilst dealing with cutting edge concepts then spinning them through a hundred and eighty degrees. With nods to The Matrix and Tron and with a good layer of modern Multiplayer Virtual Reality Games such as World of Warcraft this book wraps the reader up in its own internal reality that is utterly convincing.

The story centres around the idea that a huge multiplayer virtual reality game achieves sentience and will not let the players leave its realm until certain tasks are accomplished.  Of course, as with all good games these tasks increase in severity as the tale progresses. Not being familiar with these games I was nervous upon entering this world that gaming jargon or a presupposed world knowledge would made this difficult to read but Perusko paints with a light touch. He eschews too much intricate description or background detail preferring instead to focus on the action and character development.

Although the plot is quite simple this only adds to the delight of the book as it allows the characters to fully develop and create some good areas of conflict. In the main, the characters are believable and well motivated with each being well defined. The main thrust of the narrative is the drive of the core protagonists to escape the clutches of this Super Mind and provides for some great action set pieces and drama.

If you are looking for a good old fashioned adventure story but set in a futuristic world then this is a first rate read.