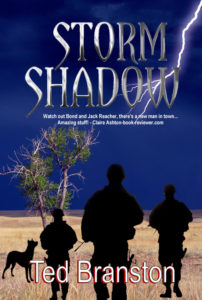 Trained as a lethal killer, his luck ran out in the blast of an IED while on patrol in Helmand Province. With his shattered body healed but his Army career at an end, he returned to his home to start life afresh in the rural countryside of south west England.
Little did he realise as he settled back into familiar surroundings and renewed old acquaintances that within a matter of weeks events would decree that his deadly skills would be called upon again.
Far from the searing heat of Afghanistan, this time right in his own backyard on the Somerset Levels, through the quiet lanes of Cornwall and across the rolling hills of Exmoor.

Author Ted Branston brings us a new action hero for today’s world, Kristian ‘KB’ Blake. Springing from the pages of this first novel, in what promises to be an excellent series, ex Para KB races through enough action set pieces to keep any fan of Chris Ryan or Lee Childs on the edge of their seat.
After being invalided out of the Parachute Regiment, KB is trying to find a new life in Civvy Street. However, fate has other plans. His planned second career as an Estate Manager in the Southwest of England is soon derailed by a chance encounter with an ex Royal Marine who is acting as a minder for a visiting Pakistani dignitary. After foiling an assassination attempt, it’s not long before KB is drawn headlong into a terrifying chase involving a terrorist cell operating out of a sleepy country village in Devon.
With a story as up to date as tomorrow’s headlines, Ted Branston has created a hero we can believe in. KB is a man with a strong sense of right and wrong and his specialist training makes him a dynamic but ultimately, highly believable character. Branston is not afraid to tackle the difficult subject of fanatical terrorism in a no-nonsense, head on manner. One suspects the author has a strong military background himself as the details concerning the rehabilitation of injured servicemen and women ring with authenticity.
Branston’s writing style is sharp and focused with very few wasted words. His action set pieces are written with a pace and level of skill usually only seen in the masters of the genre and is highly unusual in a debut novel. His characters are well written and leap from the pages as fully rounded individuals, each with their own motives and beliefs. Even the minor characters appear as real people and it this multi-layering which pushes this book out from the mass of Action Hero thrillers.
Branston is certainly going to be an author to watch, it will be interesting to see how he follows this up.