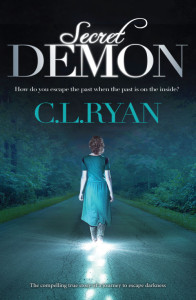 Based on a true story, Secret Demon relates the astonishing, and often harrowing, childhood of a girl whose life is beset by abuse and demonic activity.
We follow Megan as her idyllic early years in rural Ireland are abruptly ended when she is taken from her grandmother’s care to live with her parents in England. While struggling to adapt to a new culture and being bullied at school, Megan’s life is dominated by the unpredictable behaviour of her troubled mother, Patsy. When her much loved father moved away to work, Megan is left to look after her siblings as Patsy’s life becomes engulfed by demonic possession and alcohol abuse.
Well-meaning social workers place Megan in an outwardly respectable home, only for her and her brother, to suffer horrific abuse at the hands of their foster carer.
Upon returning to Patsy, Megan becomes increasingly aware of the demonic presence in her home which seems to be particularly focussed on her. She learns to cope with the demon and embraces her true nature – finally harnessing it to take on her playground tormentors. Secret Demon is a supernatural story of one little girl’s battle against abuse and neglect. It is the first of a series which follows Megan as her physical and spiritual lives unfold.

Secret Demon is based on actual events and follows the troubles surrounding one family cursed with an evil that has been handed down over the generations. An ancestor of the female line, widely regarded as a witch, escaped from an occult sect and started a chain of events that would reach down through the generations and pose a real threat for a young family just trying to make a start in life.

Witchcraft and other occult practises had always played a part in the family history and often proved a good way to turn a penny in hard times. But when evil wants its payback the debt falls on Patsy and Tom Murphy and their two small children. Fought over by both demons and angels, a demon finds a host in the Murphy’s newborn daughter and it’s not long before the family starts to disintegrate as the reaches all those who come into contact with them.

The book is an uncomfortable read and the matter of fact way the author talks about demons and angels is in itself quite disturbing. Everyday events can become unsettling when seen through the lens of pure evil and when other people around the family start to notice strange things or to act in unnatural ways then it does make one wonder.

Author C.L. Ryan paints a stark and disturbing picture of the events as they unfold in an increasingly horrifying escalation of evil and chaos. Treading a line somewhere between Rosemary’s baby and The Exorcist this would be a good story on its own but when one factors in the supposed truth behind this then it is all the more disturbing. The characters are well drawn and the authors keen eye for detail would indicate a certain closeness to these events.

This is not easy bed-time reading as not only does the book cover all manner of occult goings-on but there is also a large element of child abuse and violence always present which adds to the general feeling of deep terror that surround the participants in this tale. Ryan tells a compelling story and handles it in remarkably skilful way for a debut author, certainly a name to watch out for.