Mercy for the Fallen: Legacy of Hope 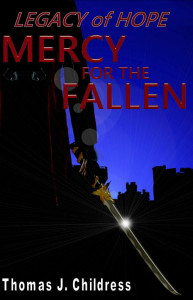 Nearly a decade ago, the land of Edenia was almost destroyed by an invading barbarian horde. Before they were defeated, a small group called HOPE discovered a mysteriously advanced robotic city hidden beyond the Northern Mountains. They used its technology to drive away the barbarians but did so at a terrible cost.

The story follows an assassin named Kenji who will stop at nothing to have his revenge against the man who ruined his life while being hunted down by his fellow assassins, his only family. Along his journey, he happens across four unlikely people that change him and his quest forever. In the midst of a land torn by civil war and the mysteriously advanced city, the five misfits quickly find themselves locked in a desperate struggle against the evil behind the chaos that threatens to destroy their world.

First, however, they must overcome the failures that define them or be destroyed by it.

Mercy for the Fallen is fast paced fantasy book featuring all of the expected tropes of the genre. One of the greatest difficulties in this genre is how to introduce a new reader to the worlds the author has created without overwhelming them yet still giving a good base for the story that follows. Thomas Childress has used a unique ploy in the opening pages, not a bad start to a genre book of this nature.

When the now peaceful country of Edenia falls victim to an attack by a vicious neighbour, war veteran Talon Orion must take up arms once more and fight for his land. Repelling the attack with the help of a mysterious technologically advanced race peace seems to settle for a while. But not long. Following the adventures of a small group of survivors the story rattles along like a chariot race.

Childress has a good grasp of action and manages to keep his characters interesting amid the various battles. In weaker hands this may well have descended into yet another computer game narrative of kill the bad guy then wait for the next one and kill him too. Whilst the action is frenetic the author still gives the reader time to breathe in between some spectacular set pieces.

For a first time author this is quite an achievement as first time fantasy novels often become too bogged down in their own mythology, leaving the reader dazed and bewildered. It’s good to see new talent break through and Mercy for the Fallen looks set to rank up there with some of the giants of the genre such as Robin Hobb and Jeff Jones.