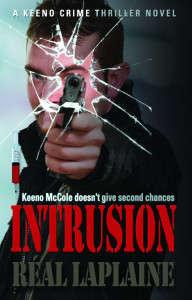 As a man brutally beats and then strangles the woman, four-year-old Keeno McCole grabs a pair of kitchen scissors and drives them into the attacker, saving his mother from an ugly death. From that day forward, Keeno knew his place in the world, and over the years he honed his fighting skills. Now, as head of the Royal Canadian Mounted Police special anti-terrorism unit, McCole and his team go up against major players in the arena, taking them across the vast Canadian domain and into China and America as they chase down the criminals. Keeno’s unique personality and his tenacious, though reckless obsession to stop the criminal element, not only puts the FU back into crime-fighting but will keep you riveted to the end.

Author, Réal Laplaine, without being apologetic tells a suspenseful tale with dialog as raw and true as the Royal Canadian Mounted Police characters, who attempt to thwart a plot of international proportion. Intrusion brings to life Keeno McCole, an action hero, who has an extraordinary passion for justice, and despite the dangers, Keeno tries to honor the motto of the RCMP, “We always get our man.” – Nancy Lee Canfield, Author of A Rose for My Mother

In the Canadian wilderness, fifty-eight-year-old Etsen Nakolak  is found dead in his battered truck. Just another car crash victim, until that is he is found to have microchips implanted in his arm and body.

And so opens the latest thriller from Canadian author Réal Laplaine. The action swiftly moves to Toronto and another car crash victim, this time a junkie clutching a briefcase. Keeno McCole, from the RCMP’s crack Anti-Terrorist Unit, is pulled in to investigate when it is discovered the briefcase appears to contain a lethal virus.

Réal wastes no time in unnecessary exposition or scene setting, preferring to head straight into the action which is his trademark in the Keeno McCole series. A brief back story to lay the foundations for Keeno’s ruthless character and the story is off, firing on all cylinders from the first page.

Keeno is a true James Bond type character but with a higher degree of realism, Réal Laplaine has clearly done his homework on the workings of Police Anti-Terrorist Units. Like all good heroes, Keeno is a deeply flawed man but with a strong sense of right and wrong and a dogged determination to always get his man. The ensuing chase starts out in Canada but rapidly becomes an international race against time to prevent the deaths of tens of thousands.

Réal Laplaine has a talent for engaging characters and plots which wrap the reader up from the opening lines. His skill in creating an action hero for today’s world is quite remarkable and Ian Fleming would be proud to see his legacy flourishing in such safe hands.