Dead of the Winter Sun 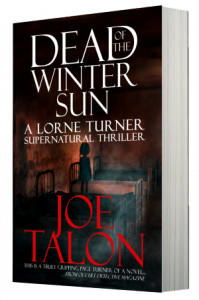 Lorne is beginning to understand that the dead might not stay in the graveyards where they are left. He also knows it’s time to start facing this disconcerting reality in the same way he faced his enemies in battle.

So, when Eddie Rice buys a rundown cottage on Exmoor, and an old graveyard, which should be empty, things become increasingly weird. It isn’t empty for a start. Not of bodies, or the whispering dead.

After an elderly woman is murdered nearby, Lorne, Ella and the others begin to uncover a plot that links this quiet corner of the world with Cold War espionage. Soviet secrets unravel and the more Lorne discovers the closer to breaking point he gets.

The Winter Sun burns in his blood, eating his mind. Can his desert hitchhiker save him? Or will his sanity fold under the weight of Cold War madness?

This is Lorne Turner’s third outing and what a story. The tension starts with the burial of a child in 1952, from this sad event the entire narrative unfolds. When Ella Morgan discovers the dead body of an old woman in the village of Luccombe on Exmoor things begin to unravel for Lorne and his friends. A terrible conspiracy of silence and abuse is unravelled while lives, and minds, are placed at risk. From MKUltra to Russian and American business interests trying to murder their way to Soviet secrets, and the haunted remains of a World War II hospital screaming out for its restless dead to find peace. It’s a story that grabs you and never releases you from its grip.

Joe Talon has once more woven history into the main narrative without any seeming effort. The mundane world and the supernatural threat weaves tentacles around the protagonist and his companions to startling effect. The locations are vivid in your mind thanks to Joe’s skilful but subtle constant use of metaphor to help the reader experience every single part of Lorne’s experience. It’s a fine example of its genre, creating a sense of menace from the real world and the supernatural. Lorne’s tough exterior is beginning to soften as he learns to become more human and less soldier, but that warrior soul is never far away.

That’s the beauty of these books, Talon allows the characters to have breathing space while never letting up on the action. The emotional impact of this makes the reader race through the story. These books just keep getting better.