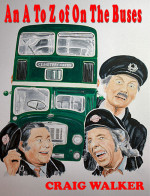 The hit television sitcom On The Buses was a massive hit across the world and ran for seven seasons from 1969 to 1973. The success was in no small part due to the immense talents involved both on the screen and off. With its exceptional writers and a cast of household name actors, the series sprang from the screen to captivate audiences from that start and retains its magic to this day. Now, for the first time, author and custodian of the On The Buses Forum, Craig Walker, has compiled a comprehensive reference work for the whole series with over 1,000 separate entries. Did you know for example that the special effects for the film version were created by Les Bowie, who later won an Oscar for his work on Superman the Movie? Or that the lyrics for the film were written by Roger Ferris, the sound engineer on The Beatles last ever recording? An A To Z of On The Buses is a goldmine of information featuring not only fascinating trivia but also in-depth interviews with cast members and amusing anecdotes from other members of the crew. Written to appeal to fans young and old from all over the world this book not only offers a nostalgic trip down memory lane but also full character, cast and crew biographies, details about the buses and studios used and much more. You haven’t learnt all there is to know about this classic British comedy until you’ve read An A To Z of On The Buses.

The A to Z of On The Buses is an in-depth review of the highly popular television sitcom of the 1970s. Author Craig Walker clearly has a great love for this series and his knowledge is encyclopedic. Each episode is clearly described and the main characters listed. For those with an interest in the actors, his biographies are fascinating and littered with interesting snippets of little-known facts. Everything is clearly laid out with good references and links to other sources. On The Buses was a much loved classic of seventies sitcoms and the fanbase is still huge. The programme still continues to be repeated around the world so the audience for this is huge.

This is not a small book either in content or physical size and makes an attractive coffe table book. In addition to the details about each episode Walker also includes the three films and many exclusive interviews with cast members. It’s one of those books which are just perfect for leaving by your favourite armchair and dipping into randomly from time to time and especially when watching the show itself. You’ll never be stuck for an answer when somebody asks the classic question, “What’s he been in?” It’s all here!

A lovely book and obviously the result of a massive amount of time and research. Great fun.