A Bridge To Cross 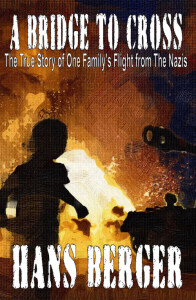 The references in this book are from the pages of my mother’s journal. The incidents described in my manuscript details our struggle fleeing the Nazis, the Russians, and the flight to the West. In the spring of 1944, Hitler’s storm troops and allied forces attacked all of Germany and forced his radical policies on the citizens. Heidelberg was not exempt. The once peaceful city, the romantic section of town, its castle towering above as the guardian of the city, became a place of tyranny, murder and fear. I know this to be true. My name is Hans-Günter Berger, and I was there. My sisters and I, born to a father forced into service and a mother whose disdain and open defiance to Hitler could not be ignored, became a target of the ruthless Gestapo ordered to break our bones. While our father kept up the facade of compliance, our mother had no choice but to take her four children and flee romantic Heidelberg in the dark of night. As we arrived in former East Prussia, the childhood home of my mother, we were nearly crushed by the iron jaw of the Russian bear. Trapped behind enemy lines for more than a year, we felt the powerful paw bearing down on us from the far reaches of the Soviet Empire. Unspeakable mayhem ensued as the Russian shock troops came across the Prussian border. I was only two years old, and my sisters five, seven, and the oldest nine when my mother, in order to flee Hitler’s demons, we found ourselves caught in the midst of one of the biggest and bloodiest tank battle of the war.

This is the true story of a family fleeing the terrors of Nazi Germany towards the end of the Second World War. As the germans were being routed by the allies on one side and the Russians on the other, two-year-old Hans Berger, older siblings and mother witness the atrocities perpetrated by the Nazi Storm Troopers as they desperately tried to hold the city of Heidelberg. The Russian troops came closer and the fighting became more intense as they once beautiful city crumbled under the onslaught. Fearing for her young family, the mother gathers up the children and makes a break for safety.

The story is told from the viewpoint of the author, Hans Berger, and he paints a terrifying picture of the brutalities which abounded during the closing stage of the war. Although only two at the time, Berger has meticulously put this book together from personal memories, recollections of his sisters and notes in his mother’s diaries written at the time. His style is highly unusual as he creates the story through the eyes of a young child and this is a little difficult to get used to at first although it doesn’t take long to settle into.

The story itself is really quite harrowing and highlights the very personal effects a war can have on young minds. This is a timely book and reminds us that refugee families fleeing the horrors of all out conflict are nothing new. Berger has a strong tale to tell and his message comes through clearly. Highly recommended.